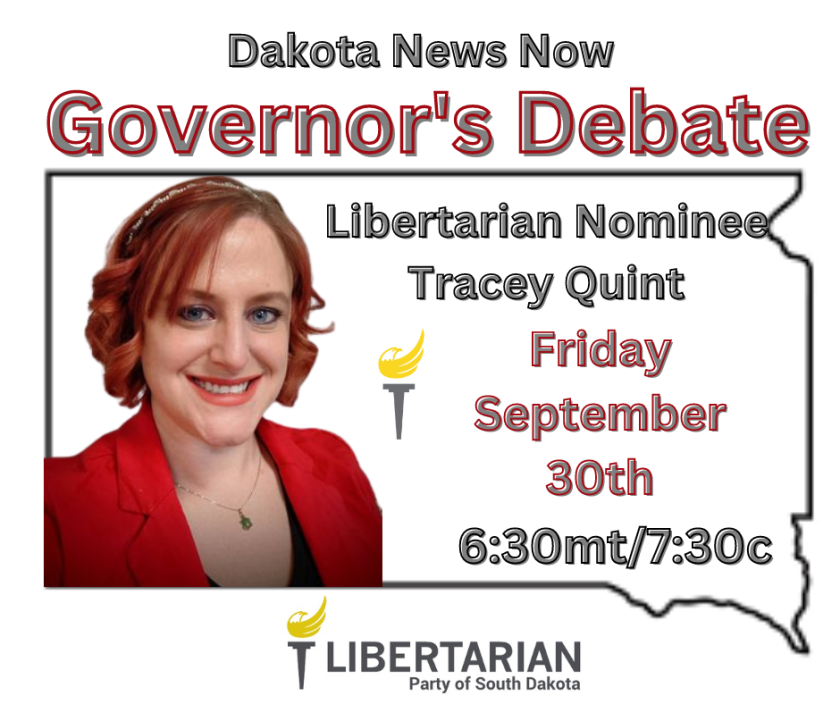 Tracey Quint, the Libertarian Nominee for Governor will be competing in South Dakota’s lone Governor’s debate which takes place this Friday night in Rapid City at 6:30 mountain/7:30 central. The debate is co-hosted by Dakota News Now and KOTA/KEVN and will be broadcast on KEVN and FOX in Sioux Falls.

You may remember that current Governor Kristi Noem said she would only show up to one debate this year after refusing to participate in a debate hosted by South Dakota Public Broadcasting a representative of the Kristi for Governor campaign said they declined the invitation from SDPB because they believe the National Public Radio (NPR) and SDPB to be “leftist.” You can read more about that here with a full statement from the Noem campaign. At the time SDPB was talking about going ahead with the debate without Noem’s participation with an empty chair on the stage to represent the current Governor, however we have heard nothing about a SDPB debate since that time. Which isn’t a big surprise since most of there articles don’t seem to mention Ms. Quint being involved in the debate this Friday. So it appears SDPB has moved on and are avoiding a Smith/Quint only debate or forum. We actually that would be a great discussion so that is unfortunate!

I did want to point out that many Libertarian candidates across the country are fighting for ballot access and inclusion in debates in their respective States. It does appear, unfortunately for voters, that inclusion in debates at the highest level are unusual for Libertarian candidates. From the Presidential elections down to Statewide races, the two party system seems to be hell bent on making sure there are only 2 people on the debate stage regardless of how many candidates are actually running for an Office. In fact Keloland News will not be hosting debates with candidates for either of the two Congressional races either ( Collin Duprel for US House & Tamara Lesnar for US Senate) because according to their parent company’s rules for debates, the Libertarian candidates do not meet the arbitrary qualifiers such as, having raised $50,000 in donations and having a staffed full time campaign office open Monday through Friday. Because after all nothing says lets get money out of politics like making money a qualifier to be heard by the voters…

Thanks to SDPB there will be debates with Tamara Lesnar the Libertarian candidate who is running for US Senate in Sioux Falls on November 4th and Collin Duprel who is running for US House in a two way race against Dusty Johnson, will also be in a debate hosted by SDPB on October 20th. Now we are grateful for the opportunity for Libertarians to be on the stage to make their pitch to the voters, however I would like to point out that early voting typically starts at the end of September and with almost 30% of voters choosing to vote early in 2020, it really is a disservice to the voters to hold these debates so late in the election cycle. Something they could keep in mind for the future, although I can’t help but think it’s done this way on purpose.

Now back to Tracey Quint for Governor, not only will she be competing in the debate the evening of September 30th, her campaign will also be hosting a Meet & Greet event afterwards in downtown Rapid City. You can stop by the Wobbly Bobby at 8:30pm to meet the candidate and have a conversation with Tracey Quint.

Unfortunately Tracey’s running mate Ashley Strand, who lives in Rapid City, won’t be able to attend either event due to a recent positive test for Covid. However the HHWD plans to live stream the debate this Friday and Ashley Strand will be a special guest on the show!! You can tune in to that Live with us on Facebook, Twitter or Youtube the night of the debate.